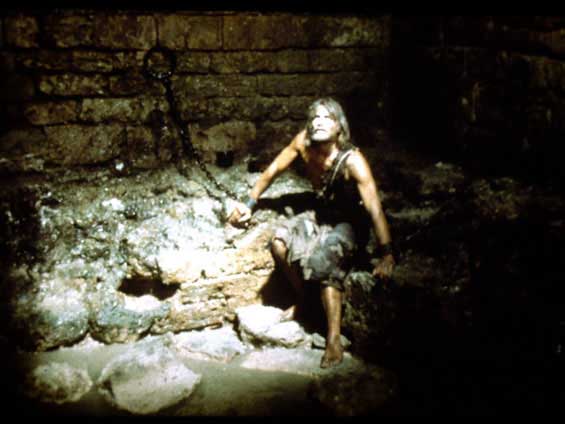 Sermon for the Third Sunday in Advent based on Matthew 11:2-10

Dear people who have good news preached to you: grace, mercy, and peace to you from God the Father and our Lord and Saviour Jesus Christ. Amen.

Our expectations of Jesus often miss the mark. We are often tempted to ask Jesus, “Are you the one who is to come, or shall we look for another?” He doesn’t always do what we expect Him to do, even when we think it is obvious what He should do. God’s thoughts are not our thoughts, and His ways are not our ways (Is. 55:8).

John the Baptist sent his disciples to ask Jesus that question, “Are you the one who is to come, or shall we look for another?” John was in prison for preaching repentance. He was in prison because he had been preparing the way of the Lord as sent by the Lord. If Jesus is truly the promised Saviour, surely He would rescue John from prison, right? But God’s thoughts are not our thoughts, and His ways are not our ways.

John himself had said concerning Jesus, “He must increase, but I must decrease.” (Jn 3:30) John had been pointing his disciples to Jesus saying that He is the Christ; that He is the Lamb of God who takes away the sin of the world (Jn 1:29). But John’s disciples were jealous when they saw that Jesus was baptizing and that everyone was going to Jesus instead of John and following Jesus instead of John. Thus, John told his disciples, “He must increase, but I must decrease.”

John ending up in prison was part of him decreasing, but it was a tough pill to swallow. Surely Jesus could have just let him go retire on some Mediterranean island, but that was not His plan for John. His plan was for John to end up in prison until he was beheaded by Herod the tetrarch.

“Are you the one who is to come, or shall we look for another?” Jesus answers John’s question in two ways. First, by His works, and second, by His words. He did the same thing when the Jews surrounded Him in the Temple and said to Him, “If you are the Christ, tell us plainly.” (Jn 10:24) Jesus responded to them, “I told you, and you do not believe. The works that I do in my Father’s name bear witness about me… even though you do not believe me, believe the works.” (Jn 10:25,38) Jesus speaks God’s truth and His works prove that He is the Christ promised by the mouth of the prophets. See what God spoke by the prophets concerning the Saviour, and see that they are fulfilled in Jesus.

To John’s disciples, Jesus quotes from the prophets. He quotes a prophecy from Isaiah about the promised Christ, how through Him the blind will receive their sight and the lame will walk, how the lepers will be cleansed and the deaf will hear, how the poor will have good news preached to them. Jesus ends with saying, “And blessed is the one who is not offended by me.”

Jesus’ words and deeds prove to John’s disciples that He is the promised Messiah, the very Lamb of God that takes away the sin of the world. John never did the miraculous signs and wonders Jesus was doing. Neither did anyone else. Further, these signs and miracles were foretold by the prophets. Therefore when they saw these signs that the prophets had foretold, they could be assured that Jesus is the one who is to come and that there is no sense looking for another.

The Jews, even today, look for another. Jesus is not what they expected, so they rejected Him and they reject Him still. They are offended by Jesus, so they still wait for a saviour (except of course for those Jews who have given up waiting altogether and expect no saviour to ever come).

Those filled with pride and self-conceit will disagree. Those who do not understand the wickedness of their own hearts or how great their sins are don’t care for the preaching of the Gospel. They only want healing in this life and care nothing for eternity. They want comfort and pleasure in this life and do not want to hear that they are spiritually poor children of God’s wrath and deserving hell.

However, those whose hard hearts have been crushed by the Law desire nothing more than to hear good news preached to them. Their pride and self-conceit has been crushed by God’s Law. They don’t look to themselves to save themselves from their sins. They know it would be futile. They look to and see Jesus, the promised Saviour, the Lamb of God who takes away the sin of the world. They hear the good news that their sins were put on the Lamb of God who was led to the slaughter without complaint. They hear the good news of the undeserved promise of eternal life. They would rather be blind, lame, leprous, and deaf than have the good news taken away from them.

What more joyful tidings could a poor sorrowful heart hear than his sins are forgiven, his conscience is at rest, the Law is fulfilled, and at last eternal life is granted to him as his inheritance? Such a heart cannot stay sorrowful and troubled. Sin, death, hell, the world and the devil are scorned, derided, and held in contempt. Joy fills such a heart because iniquity is forgiven and sins are covered by Jesus’ blood.

This is the good news Jesus sent to John and that He sends to you. Jesus takes misguided expectations and gives His promises that exceed all expectation. If you want to know what to expect of Jesus, look to His promises. Jesus will never fail you. And blessed is the one who is not offended by Him. Amen.

The peace of God which surpasses all understanding, will keep your hearts and your minds in Christ Jesus our Lord. Amen.